Chipstable parish is made up of the hamlets of Chipstable, Raddington and Waterrow and lies to the west of the Somerset town of Taunton. The Chipstable, Raddington and Waterrow community have a combined population of 129 households (92 in Chipstable & Waterrow), with the different communities linked together by a network of small lanes, tracks and footpaths. The parish plan process in Chipstable parish was led, not by the Parish Council but by the Chipstable, Raddington and Waterrow Community Group. The Community Group was established in 1999 by a group of volunteers keen to work for the benefit of the community, primarily by organising community social events and raising funds for local projects. In 2001, the Community Group decided to undertake a village appraisal and write a parish plan to make sure that the funds that were raised were actually going to those projects that were considered a priority in the community. 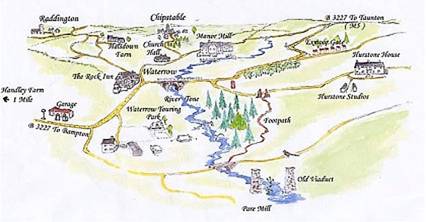 Birds Eye View of the Parish

The parish plan has resulted in a number of important achievements, for example:

·          The biggest issue for the parish was the village hall – it is a church hall, owned by the Church & Community Hall Trustees.  The parish plan showed that people felt strongly about the hall, wanted to use the hall more often and wanted better facilities.  As a result of the parish plan, the Trustees have agreed to further development of the hall and have applied for Lottery funding for an extension of the hall, using the parish plan in their funding application – they are awaiting the response.  Central heating has been put in and the roof has been insulated; they are currently looking at improving parking facilities.

·          Waterrow is fairly scattered and each household used to order its heating oil independently with oil tankers coming in for just one delivery at a time.  As a result of the parish plan, the village now work with a joint ordering process with one tanker coming in for everyone – they established an oil delivery ‘hotline’ and local residents who need oil can simply call in their orders by the 15th of each month.  This has led to a win-win situation with cheaper delivery for local residents and less traffic on the Waterrow roads.

·          Wiveliscombe, the nearest town, pulled together the responses of the parish plans of the different parishes, including the Chipstable parish plan, to assess the needs and priorities of the wider community.  One of the results was that the Wiveliscombe Area Partnership (a non-profit company) took over the two minibuses from the Taunton Deane Borough Council enabling the minibus transport scheme (renamed the Wivey Link) to continue.  The aim of the Wivey Link is to service the 10 parishes in the area surrounding Wiveliscombe.  The minibuses have disabled access and are being used for example to get older people from the surrounding area to doctors, hospitals, shops, etc.  Chipstable residents have to book through the central office in Wiveliscombe which is run almost entirely by volunteers.  There is huge local support for this scheme: for example, the Community Group are organising a duck race and the money raised will go to the Wivey Link.

·          The village appraisal provided the Community Group with an indication of housing needs.  This was then followed up by Taunton Deane Borough Council subsequently asking Chipstable parish to undertake a proper housing survey, TDBC also paid for this survey.  The housing survey has been completed and has led to a number of affordable housing units being built in Wiveliscombe, including sheltered accommodation for elderly people.

·          As with the minibuses, Wiveliscombe used the outcomes of the village appraisals in the different parishes to apply for broadband for the wider area.  Other outcomes that benefited from strong Wiveliscombe support include a big push on recycling and the development of maps for local walks.

·          The parish plan contributed to stronger village cohesion: in particular, the Community Group and the Church & Community Hall Trustees are cooperating much more.  The two groups organised their first ever joint activity in 2005: a pig roast with no less than 250 people attending which led to £2,500 being raised for the village hall.  Other examples of stronger village cohesion and community involvement are the fact that more people are attending the Parish Council meetings. the local community were involved with Bathelton Parish to object to a new 4x4 route being installed  – the community used the parish plan issues report as evidence and their objections to the 4x4 route were upheld.

It is possible to identify a number of good practice features in the process of developing and implementing the Chipstable Parish Plan,

in particular in terms of cooperation with other localities and in terms of overcoming a number of initial difficulties and obstacles:

·          Initially, there was quite a bit of resistance to the parish plan from some local residents and a number of Parish Councillors.  There were a number of controversial issues in the parish, in particular the local pheasant-shoot: the village was divided over the issue with shooters and local residents gaining a livelihood from the shoot opposed to any changes and other local residents complaining about the damage to gardens and road safety issues caused by birds wandering on the lanes.  People feared that the outcomes of the village appraisal could lead to a report that would then be used by the authorities to implement changes in the parish.  The parish plan’s champions succeeded in overcoming people’s resistance by convincing them that the parish plan was a way of preventing outsiders deciding issues for the parish, and about parishioners taking charge of their own destiny.   It was necessary to have a mechanism for people to get their views known.  People who initially had had some reservations were won over by the passion and enthusiasm of the members of the Community Group; they came to appreciate that there were no hidden agendas, only a sincere concern for the well-being of the community.

·          Having overcome the initial resistance, the Community Group succeeded in getting strong community involvement.  They organised a Village Views day with more than 100 people attending and achieved a high response rate to the village appraisal questionnaire (78%) by hand-delivering and hand-collecting the questionnaires and organising a prize draw.  One part of the process that worked exceptionally well was that they handed out free disposable cameras and asked the people in the parish to take pictures of ‘the good, the bad and the ugly’: things they liked or didn’t like about the village.

·          The parish plan led to a number of outcomes that were particularly beneficial to older people, for example the Wivey Link minibuses, available to the whole community and used by many elderly people -- perhaps to go to the doctor, or for shopping,  and the sheltered accommodation now provided for elderly people.

“You need people that are really committed; you cannot underestimate the time involved.  There will be objections and you need the commitment to overcome these objections.  It is a long-term commitment; not just a short one.  But if done properly, it is a great benefit to the community.  The real issue is getting that message across. There is only one way and that is by talking to people”.

“I have never seen a more committed bunch of people.  They never gave up”.

“The establishment of the Chipstable, Raddington and Waterrow Community Group is a good example of the community influencing  their own destiny.  Recently,  Boundary Committeee proposals to re-align the Parish grouping  was successfully challenged by  the local community.