The Church is delightfully situated at the centre of a peaceful village, set 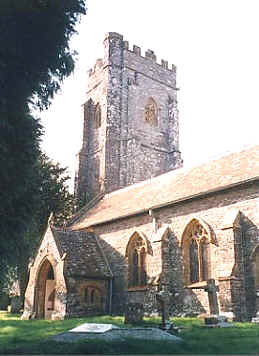 The first Rector of whom we have mention is "Stephen, Parson of Cyppestable" in 1248, but he was by no means the first, as the Doomsday Book  notes a Church at Cipestable in the time of King Edward.

The old nave and the present tower probably date from about 1239, the external evidence furnished by the tower points to this date.

The present Nave of the Church (rebuilt in 1869) stands precisely where the old Nave Stood, and is thus practically a reproduction of it. The Tower and two of the main pillars were retained, and the form of the Church then, as now, was twin aisle. The beautifully carved oak bench ends were also retained.

Both the old and the newer parts of the Church are in the Decorated and Perpendicular styles. In the rebuilding of the Twin Aisle, Chancel and Porch, building stone of the neighbourhood was used supplementing the usable material from the old Church 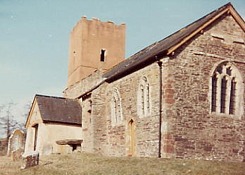 Such a situation is significant -- as is the dedication itself to the saint, Michael. Two things can be deduced there-from:

1   That this ancient sacred site was formerly a pagan one; all st. Michael's sites are likely to have been such since he, it is believed was the angel who threw the Devil out of Heaven. Anglo-Saxons called him when consecrating pagan sites for Christianity.

2   That as is claimed for many if not all St. Michael's Churches, it lies directly on a Ley line -- one of those mysterious lines of energy that are believed to radiate outwards from that most hallowed of English sites -- Glastonbury.  All such churches are on Tor sites overlooking farm lands.

The origins of this Church could go back as far as King Alfred's time, or beyond. It's style is certainly early English with just a west tower, a nave with south porch and a chancel.

Holy Water inside the porch. Such stoups were common in very early churches, went out of fashion in medieval times and returned only in the 16th century.

The ravages of time and reconstructions of dubious quality have left their marks, but despite this it retains its medieval character and great charm.